Giant Pandas are fascinating animals, and one of the things you hear most frequently about them is how difficult it is to breed them in captivity. Only about 2,000 giant pandas remain in the world, and a sixth of them are in captivity. 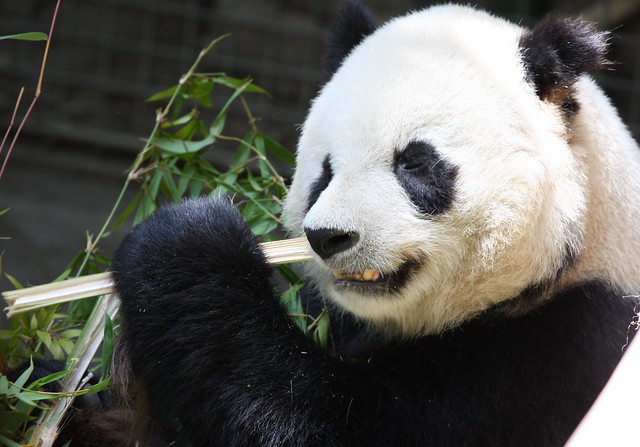 The challenge with growing their numbers is that it is just very hard to get them to breed in captivity. The females are only receptive once a year and are sometimes fertile for less than a day. The males in captivity in many cases don’t even seem to know how to do the deed!

Female pandas are receptive only once a year, and sometimes are fertile for less than a day—an unusually narrow breeding window. As spring approaches, scientists at the National Zoo monitor Mei Xiang’s behavior and hormone levels, and a Chinese consultant prepares to fly to Washington on short notice, to assist. In China and elsewhere, panda handlers have encouraged unenthusiastic pairs by showing them “panda porn”—footage of other pairs having sex—and giving the males Viagra. Some handlers have claimed success with the videos, but pandas in the wild are solitary creatures, with limited opportunities to observe the behavior of other adults, and many scientists doubt that they engage in social learning.

The National Zoo’s approach has been more mechanistic. Last year, at the suggestion of the Chinese consultant, carpenters built a low wooden platform in the enclosure that had been Mei Xiang’s preferred mating location. “We were thinking that if she would pancake at a higher level Tian Tian might be able to hit the target,” Brandie Smith, the zoo’s panda curator, told me. It didn’t work. This year, two zookeepers placed a plastic cylinder, about a foot in diameter, across the threshold of the enclosure. As Mei Xiang led Tian Tian inside, she fell over the cylinder, and her rump rose into the air—exactly as the zookeepers had hoped. But then Tian Tian lifted her off the cylinder, placed her on the ground, and stepped onto her back.

The same article touches upon  many other interesting things about them like how their diet consists of bamboo shoots, but they are classified taxonomically as carnivores. Another bit of research done recently shows that the bacteria found in their gut is suited to digest meat but not bamboos.

A last bit of interesting info about them is that they are characterized as what’s known as “charismatic megafauna” which is a term described in Wikipedia as follows:

Environmental activists and proponents of ecotourism seek to use the leverage provided by charismatic and well-known species to achieve more subtle and far-reaching goals in species and biodiversity conservation.[citation needed] By directing public attention to the diminishing numbers of giant panda due to habitat loss, for example, conservation groups can raise support for the protection of the panda and for the entire ecosystem of which it is a part.[citation needed] (The giant panda is portrayed in the logo of the World Wide Fund for Nature.)

Spent a fair bit of my Sunday afternoon learning about these amazing creatures, and I am going to seek an opportunity to take a look at them in real life now.