I’m currently reading a very interesting book called “Papyrus: The plant that changed the world”, and it contains one of the most amusing anecdotes I’ve come across in recent times.

This book is about the plant Papyrus, and how it has been used throughout the ages, and is quite well written, and interesting.

Usually, you think of Papyrus as the paper plant, but the ancient Egyptians used it to build their houses, and boats as well (amongst other things).

In fact, the book states that Papyrus was so important to them that they ascribed a god to the plant, and named him Hapi, but other sources say that Hapi is the god of river Nile, and maybe the confusion is caused due to the fact that he wears a crown of Papyrus on his head.

Papyrus was also used quite extensively in rope making during those times. The book contains a story about Xerxes I ordering a floating pontoon bridge to be built between Persia and Greece using which he would transport his army to conquer Greece.

This bridge is described extensively in Herodotus’ Historia, and modern historians think that the bridge was about 2 kilometers or so. There were in fact two, one for the armies to march, and one for supplies, and they were floating bridges made by a row of boats strung together by rope.

This is where Papyrus comes in because you needed a massive amount of strong rope, and they chose Flax and Papyrus rope for it.

While the bridge was still being constructed — the sea became turbulent and completely destroyed it. 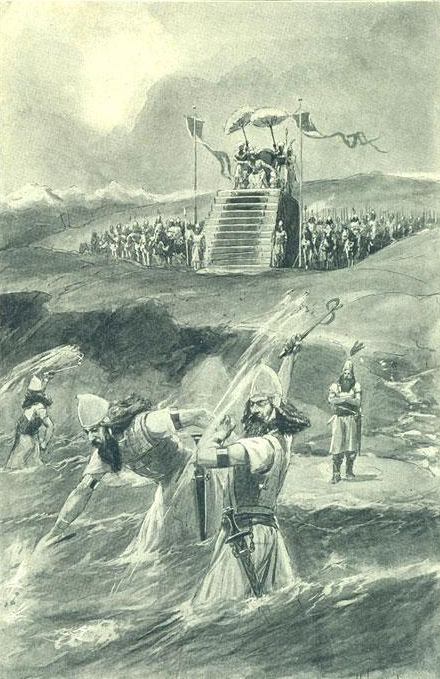 This of course infuriated Xerxes, and he had all the engineers beheaded as punishment. But, that was apparently not enough because Xerxes held the engineers and the sea responsible, so he also punished the sea by sentencing it to 300 lashes, and this punishment was promptly carried out by his royal whips!