Over the years I have read a lot of interesting things about chess pieces, and I wanted to consolidate all of those ideas at one place. These stories reflect politics, warfare, and even societal biases of the era and the place where they come from, and even if their veracity can’t be vouched for, they make for interesting reading.

Chess originated in India in the 6th century AD during the Gupta Rule, and Chaturanga is said to be the predecessor of the game. The chess board must have been in existence several hundred years before that because Buddhist sources talk about a dice game called Ashtapada which you should stay away from for fear of addiction to gambling.

Ashtapada as any Hindi speaker would decipher means 8 feet, and refers to a board which is similar to an 8×8 chess board. Separate sources state that at some point there used to be a game where the roll of the dice determined which piece you moved, and maybe chess used to be played in that form at some point.

Originally, the game had four divisions – infantry, cavalry, elephants and chariots, and along with the king and the wazir — these are said to be the original chess pieces. These are the four original divisions of the armies in the Mahabharata as well, and various sources state that the epic is indeed the inspiration for the chess pieces.

The modern equivalent of these are as follows: 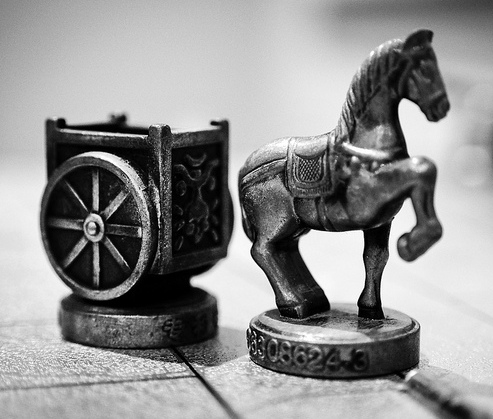 The chariot piece was the most surprising to me because I had never heard of a chariot being one of the pieces in chess. From a timeline perspective, if chariots were an original piece of chess then it lends credence to the fact that the four divisions were taken directly from the Mahabharata.

This is because Chandragupta Maurya retired the chariot corps during his reign in the 4th century BCE after studying the Battle of Hydaspes where Alexander the Great defeated Porus, and where his cavalry proved to be far more effective against chariots. So, in a way the chariot piece was in vogue even at a time when chariots themselves were not being used.

The Persians learned the game from Indians, and took it to Europe, and Africa, and in the process got rid of the elephants, and introduced the camel. When I grew up we used to call the rook the elephant and the bishop the camel, so some transposition also happened along the way.

It is not known when the queen replaced the wazir but it is certain that it happened in Europe. The wazir used to be a very weak piece with the ability to move only one square diagonally, and it took several hundred years for the queen to become the most powerful piece on the board. Initially, the queen also moved in the same way, and some medieval writer even interpreted it to be the moral inferiority of women.

Like the vizier, the original queen could only move diagonally, one square at a time. Her short, crooked movements were seen as a symbolic sin, morally inferior to the straight movements of rooks and kings. As one medieval commentator wrote: “[Her] move is aslant only, because women are so greedy that they will take nothing except by rapine and injustice.”

There is a story that this happened with Queen Isabella I of Castille, the most powerful Spanish queen in the history of that country.

Apparently, during the Siege of Baza in 1489 – the king decided to withdraw their troops, but the queen decided to go to them instead in order to lift their morale, and within three weeks the siege was successful. The rules regarding the queen were changed out of respect for her.

As the news of Baza’s fall was carried everywhere, the Crusaders’ enthusiasm at Isabella’s arrival at their camp reverberated throughout Spain, and among the manifestations of joy, the rules of chess were changed, with the Queen becoming a most powerful piece, sweeping and majestic in her moves. A few years later, Luis Ramírez de Lucena enshrined the new rules in Repetición de Amores y Arte de Ajedrez, the oldest printed book on chess we have today, and the new rules were here to stay. 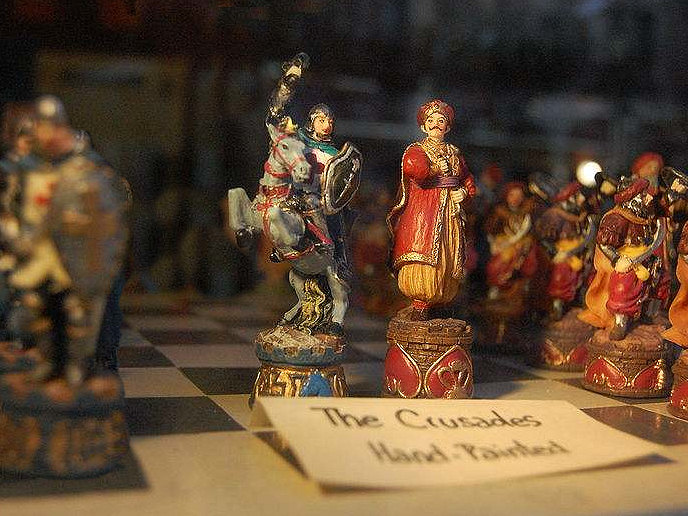 With the invention of the printing press in 1440, the timing was just right for this rule to become popular as more and more chess books were being printed with this new rule on the queen, and it was being popularized throughout the world.

There wasn’t ready acceptance on this rule though, and this new brand of chess was also called “madwoman’s chess” in some countries, but it did become the standard in the end.

One of the oddest queen related things I’ve read is that in some form of Mongolian chess – the queen is actually a dog!

This is explained by a confusion in translation.

Names recorded from the 1880s by Russian sources, quoted in Murray, among the Soyot people (who at the time spoke the Soyot Turkic language) include: merzé(dog), täbä (camel), ot (horse), ōl (child) and Mongolian names for the other pieces.

The change with the queen is likely due to the Arabic word firzān or Persian word farzīn (= “vizier“) being confused with Turkic or Mongolian native words (merzé = “mastiff”, bar or bars = “tiger”, arslan = “lion”).

The pawn is my favorite piece, and I find that the word itself is at least as curious as the piece. All the other names except the pawn meant something to me; what the hell is even a pawn?

The answer is quite straightforward really – the word has latin origins with the word pes or ped meaning foot, which then evolved to pedon in medieval latin to mean foot soldier, poun in Anglo Normal French, and pawn in medieval english.

Nowadays, there is just one pawn, but at some point, each of these foot soldiers used to be different.

On the board, from left to right, those titles were:

It is hard today to imagine so many pawns, they will cause chaos with understanding of the game, and this is how the modern chess set came to be as well.

The chess sets that we see today are called the Staunton Chess Set, and were first designed and manufactured in 1849. One story goes that tournament results with international players were being affected because many a times the players didn’t understand which piece was which, and there was a strong need for standardization.

John Jaques of London came up with this set, and named it after Howard Staunton who was the strongest player of that time to address that need.

If you have ever played with exotic pieces you would know how difficult it is to differentiate between pieces that you are unfamiliar with, and therefore it was only a matter of time that someone made a standard that was readily accepted in this most international of games.

There are several other anecdotes that I have heard that I can’t readily recall, and some seemingly too bizarre like the hump of a camel contributing to the shape of the bishop as it is today! That does sound a little far fetched, but who knows? Maybe it is true.

I had a target of reaching a rapid rating of 1700 in Chess.com by the end of last year, and I got there somewhere in October. Unfortunately, I became complacent about my progress, and lost form after reaching the milestone.

As a result, I’m currently below 1650 in Chess.com, but fortunately I’m doing better in Tactics Trainer and am over 1800 in that.

Here are the exact numbers:

Hitting bad form slowed me down, and I want to follow my regular approach to studying chess with one exception.

IM David Pruess posted four videos about improving your tactical ability, and I am following some of his advice. I particularly like the idea of visualizing the whole tactic three times before moving on to the next one, and I do that almost always these days. I think these videos contain great advice for anyone wanting to improve their tactical ability.